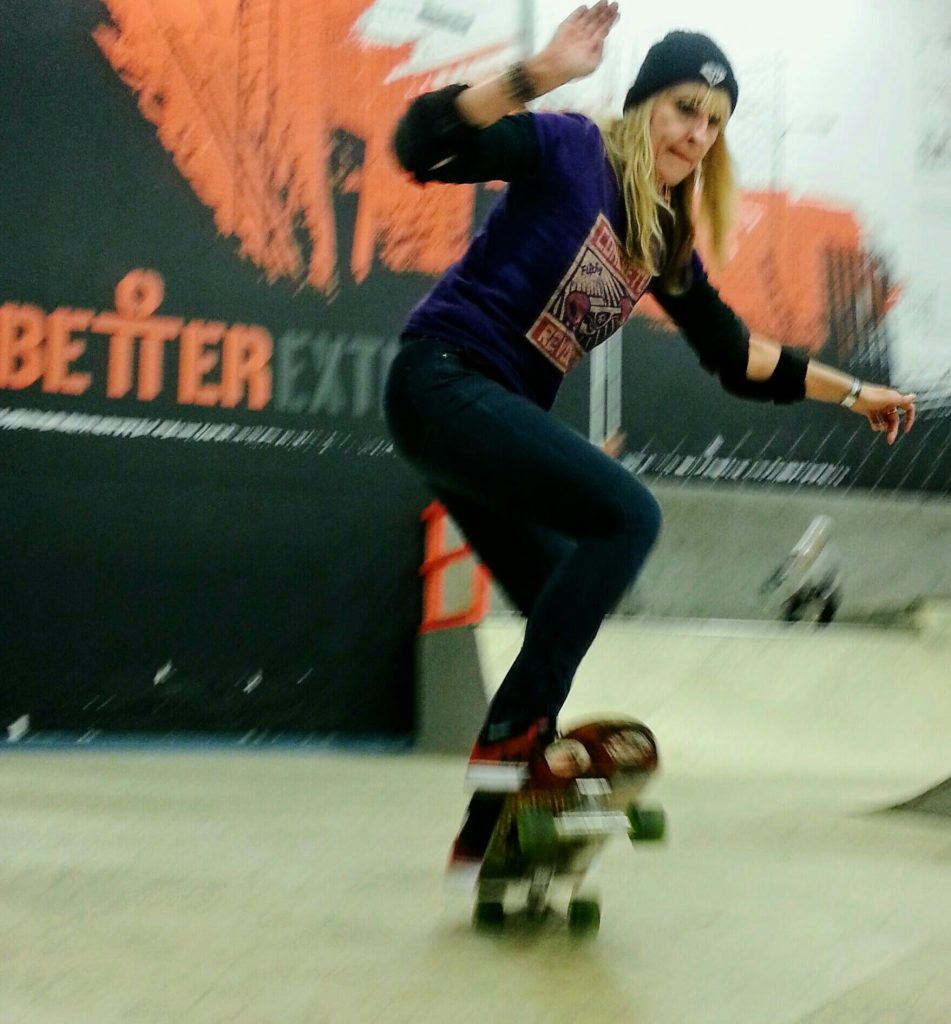 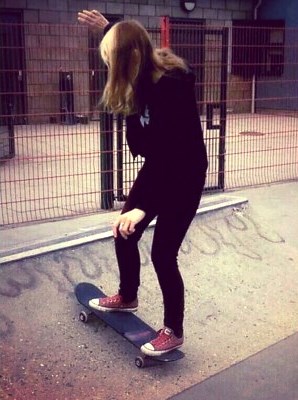 This post is very special to me as I’ve wanted to write it for quite a while. I’ve also wanted to relearn skateboarding again; that took courage, determination and the timing had to be right for it to happen.

I took the plunge in September 2014 and started taking lessons with a local skate instructor Alex Walker. Here’s his web page

He’s also instrumental in working with the local council in improving existing skate parks and SOS (Save our Skatepark) is a non profit organisation who are aiming to develop a skate park in Victoria Park, Leamington Spa.

I used to skate in my teens, not for particularly very long (hence the lessons now). My board was made of moulded plastic and was purple like this one (I’ve always liked purple)

I loved riding my skinny little board with it’s high tail. I used to love skating along the streets of my home town and zooming down hills. I wasn’t any good at tricks just liked zooming around (still do on my Marin bike and again now on a skateboard) Some things never change.

Then I stopped, I just got into other things and my life moved on. The hankering for skateboarding never truly went away and would surface every now and then. Though I’d always talk myself out of it and think it was a silly adolescent fantasy.  After my kids left home and went out into the world or to university a lot of things in my life changed. I had a lot more freedom, of movement and time and I needed some challenges/experiences that weren’t just people-based. I also starting focusing on having more fun.

That was a revelation for me. Of course I had good things going on in my life though it wasn’t enough. The skateboarding thing just kept popping up in my head.

I hadn’t been we 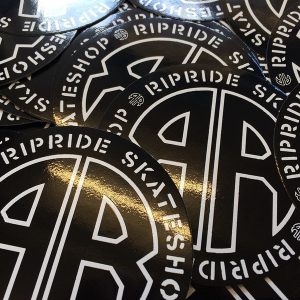 ll during the late summer of 2014 and when I felt a little better I wanted to cheer myself up so searched for skateboard shops on google. I was astounded, I had no idea there was a local skateshop. So I took the plunge and walked into Ripride Skateshop   I initially went in for 10 mins to have a look around and an hour later I came out with a firmer idea on what I wanted. Mark, the owner who is a skater himself was friendly and helpful and encouraged me to take the plunge. 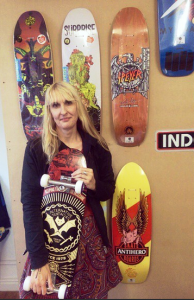 with my Alternative Tentacles/Powell Peralta deck at Ripride. I chose this deck deliberately. Alternative Tentacles are a record label who have been around since 1979 (about the time I was skating the first time)  Jello Biafra (the original vocalist for the Dead Kennedys) and Shepard Fairey collaborated on this Alternative Tentacles skateboard deck, which features Winston Smith‘s classic Bat Logo. The deck is manufactured by Powell Peralta (Stacey Peralta was one of the original Z-Boys who skated in the late 70’s. I’ve always wanted to skate vert in bowls so this deck was perfect for me and all the associations from 70’s and the skate punk theme just made my day.

Now, I’d like to talk about women in skateboarding which is the whole point of this blog post. I won’t go into the history of women in skateboarding as I’m more interested in the current scene. I’ve held the belief for a long time that we are all important especially as coming from an anarcho-feminist punk culture in my youth.

I won’t go into the history of women skaters, though one does stand out and thanks to Alex for the reminder- Elissa Steamer, here she is in action in Epicly Later’d video – part 1 of 4 below

Locally there are very few women who skate so I had to find them by other means. I’ve had encouragement from local guy skaters which has been great though I also wanted to connect with other women. I’ve had the immense fortune to find women who love skateboarding on Instagram. (Here’s mine). I have had so much inspiration and advice from men, women and kids (yup even 9 year olds!) Hello Georgia Rose!

Also older women like myself who buck the trend of skateboarding just being for young men and kids. There are amazing women who skate; here are some I’ve come across. GirlskateUK  and their website They were one of the first women/girl skaters I came across and I love their posts along with the lovely girls from Essex – Essexskatergirls. Another fave of mine is Mutterskate from Uppsala, Sweden and her blogroll on tumblr for women’s skating websites is a great resource. There is also Sheskates from the US, here’s her blog. I really hope to meet at least some of you ladies this year.

There are lots of pro women skaters one of my faves is Lizzie Armanto (“I like skateboarding and it likes me back”) Brilliant attitude! Here’s she is and other women in action last year.

I’m still learning and it’s gonna take a while before I’m anywhere near even competent on a skateboard, I have no illusions on that part, though I’m learning fast and I’m getting to grips with ramps and balance (being a Taurean helps I have oodles of determination and patience!) There aren’t enough women and girls skating though it is getting better.  I hope this encourages more women and girls to try it or to come back to it again.

The reason I skate is very simple, it makes me happy and is fun. Yes, it’s not without it’s trials and pains (chipped the head of my radius bone, after flinging myself off my board while flying down a ramp) yup, that sucked!  The worst is not having a local indoor skate park which can be very frustrating when the weather is inclement. I don’t mind skating when it’s dry and cold as you warm up quick.

I’m just going to keep plugging away at it. We were all beginners once and that’s how we get better, with lots of practice. Since we’re coming out of the Winter here here in the UK, the weather can only get better. Here’s to that and more skating!